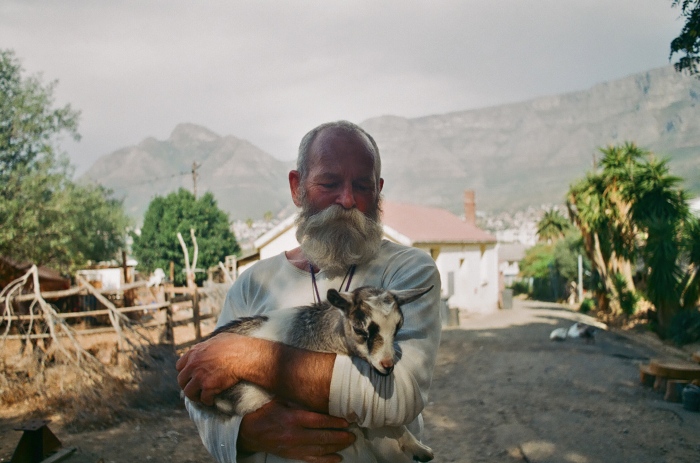 Andre is looking for alien vegetation to calm down the huge appetite of his two goats.

Passing through a hole in a fence, he finds himself in a vast space with abandoned military buildings and a forest of alien trees, large enough to meet the appetite of his very hungry goats. 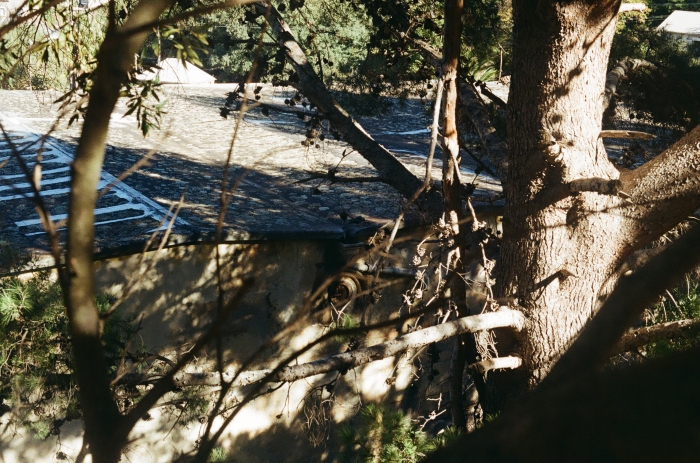 One day a policeman is here. Andre asks who is keeping this place.
“No one”.
He applies to become care keeper of the place, and surprisingly, is offered to stay.

Andre moves in. He only plans to stay one or two years, because he doesn’t want to live in town.

But little by little, he starts feeling responsible: leaving the farm would mean abandoning all the small creatures (spiders, snakes, frogs) to the unpredictable bulimia of bulldozers.
That’s how the adventure of ERF81 started. With a man feeling responsible for an abandoned place, at the end of a the nineties, when”Rainbow Nation” was still a word full of colours.

When I saw Andre the first time, I thought I finally met a real prophet.

Maybe it’s the white beard and the frank blue eyes. 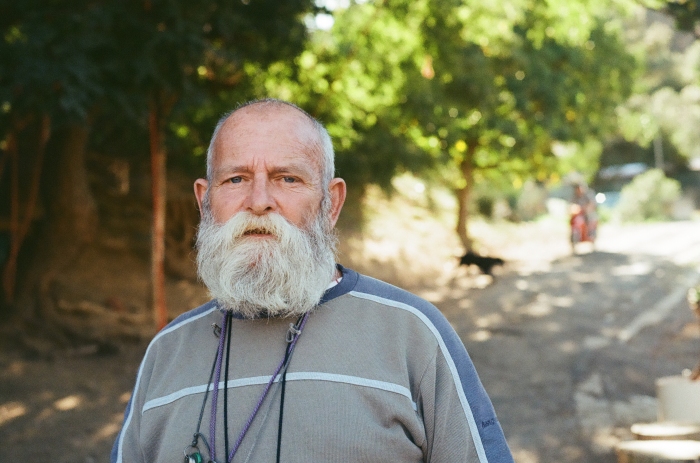 Or maybe it’s the genuine feeling that he has something really true to say and something very right to bring to the world.

I can’t believe that my first ever prophet is a Afrikaans farmer of 66.

In the rest of this article I will try to explain to you why I believe this to be true.

First, Andre is a real prophet because he has no god.
Well, he has no “official” god /sponsor.
Andre’s god is everywhere, and is everything. He praises his own religion : feeling responsible for the crap around, uplifting people and feeling uplifted by them, trying to be true to himself and the rest, letting beauty and pain inhabit him and compel him to move forward, spreading light, and for any other question, reporting to nature for its absolute fairness and terrible truth.

He says he always felt guilty of being white, and never understood the color thing :
as a kid, when adults talked about black people, he didn’t really get who actually were “the blacks”. For him, the color of the “blacks” is more chocolate and the colour of “whites” is more pink. 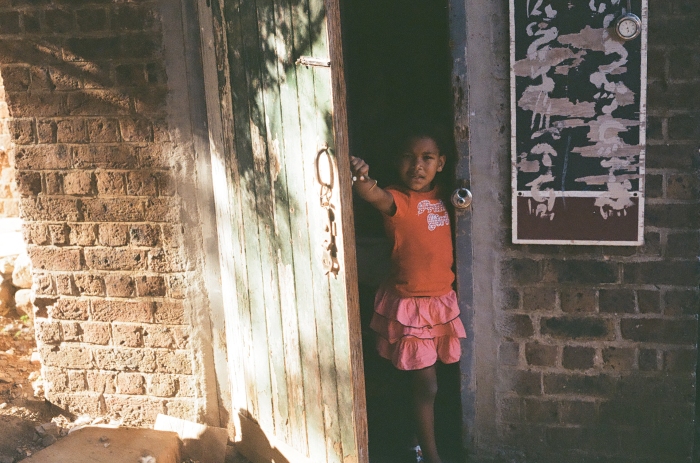 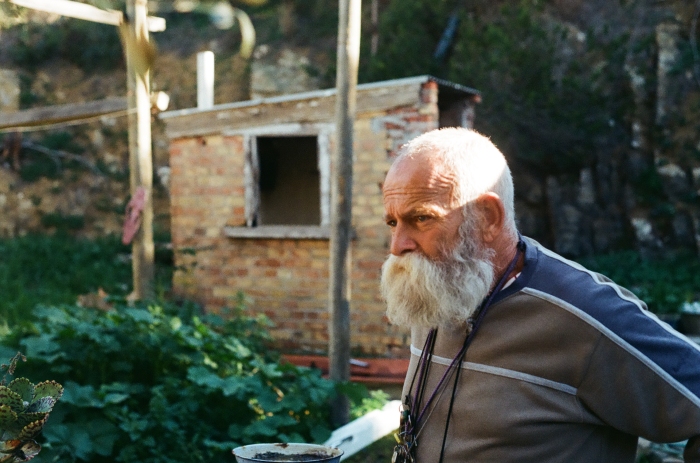 And Andre loves chocolate, so why should he discriminate something he likes ?
Since early childhood, a real prophet already feels the things that are right and the things that are wrong around him.
So, since the beginning, Andre knew there was something rotten in the kingdom of Apartheid.

Later on, his union with a black woman and the birth of his colored children would be the main reason for the heart attack that killed his father. Andre was forbidden at the funerals. And only when the children were old enough could he see his mother again.

When I ask about his philosophy in life (trying to get enlightened by his wise aura), he answers simply :

“I don’t have a philosophy in life”.

Life is not easy for a prophet. We might think light simply inhabits them  and they are just glittering inside all the time, but no! To spread pure light, one must also cross blinding darkness.

Well that’s what I think when I hear him say he will never be happy as long as he will hear in the news that babies are thrown away in bins. It might be hard for such a sensitive and upright human like Andre, who feels responsible for the dark past of his country, (by his origin and culture), and also for the quite disastrous situation of modern times, which is reflected accurately on the situation of ERF81.

“We have a new war in this country. It’s a war against stupidity, selfishness, and drug addiction”

But Andre is not a lost soul. He has nature, or nature has him, I don’t know. He knows the secrets of nature, talks with her and nature knows his heart and encourages his path, like a breeze blowing on the back of a pilgrim.

He loves nature, because it is perfect and simple. 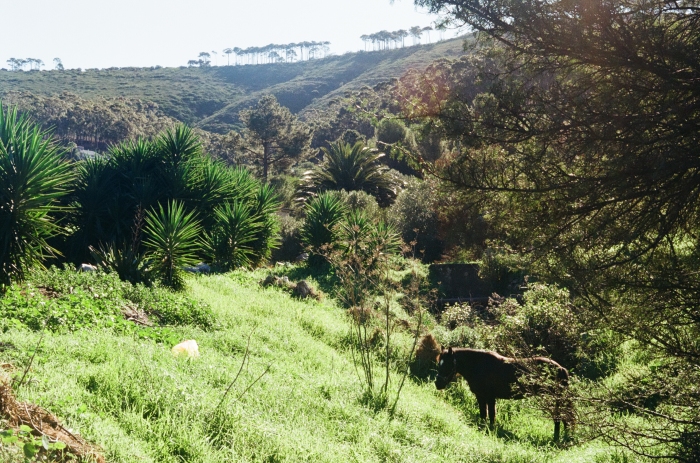 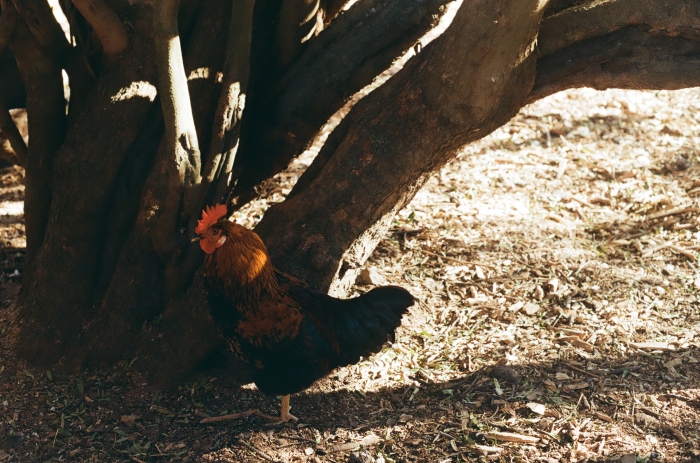 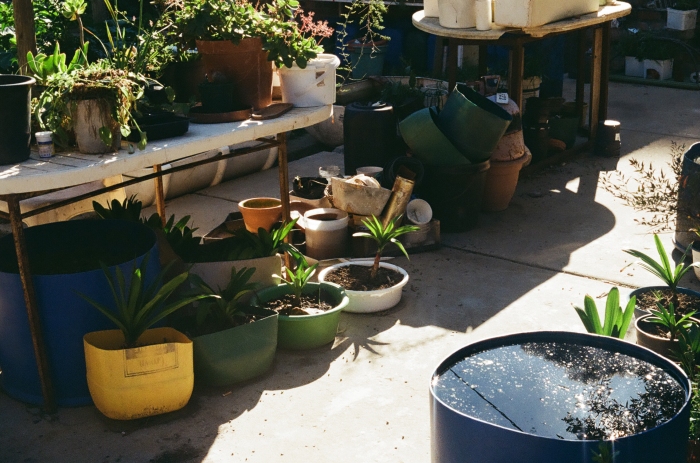 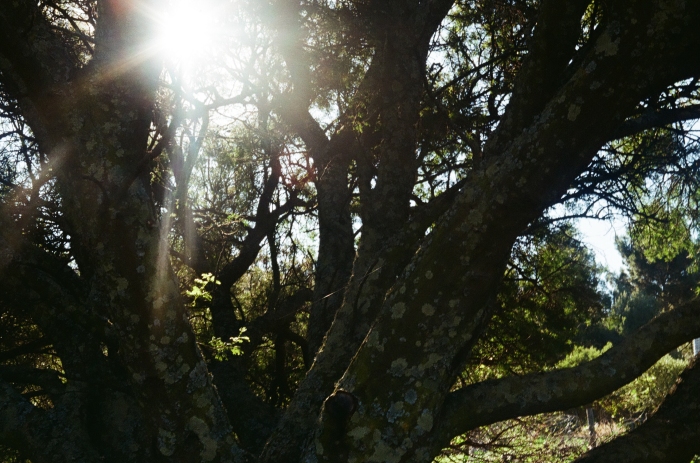 “Things are simple, he says. Only we make them complicated”.

He is not idealistic, he is not realistic; he is nothing”ic” – he is more of a “er”: a doer,  a hard worker, a multiple father, a free farmer, a care taker, a painter.

He is also a dreamer: one day I watched him as he was busy doing something with his frogs and I swear I saw his mind flying in the haze with the wings of the dragon flies.

In the mid-90’s, a man brought a 11-month old baby to the farm. A bit later, a woman came with two little kids found under a bridge. Their parents had abandoned them and the social services couldn’t take them without parental agreement.

They ended up living at the farm too. 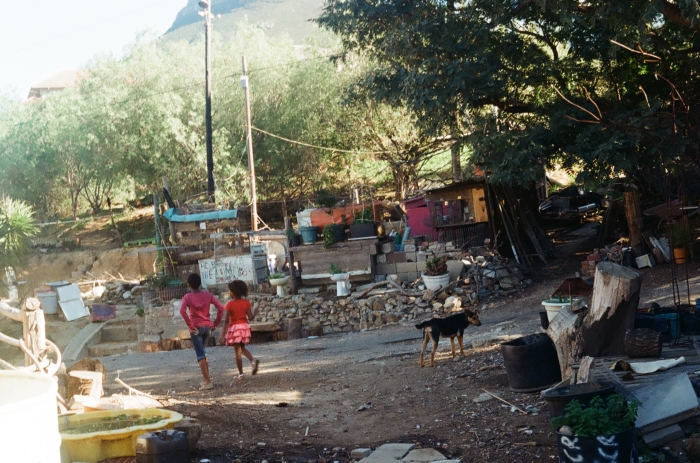 That’s how the farm became not only a shelter for small animal creatures but also for small human creatures. 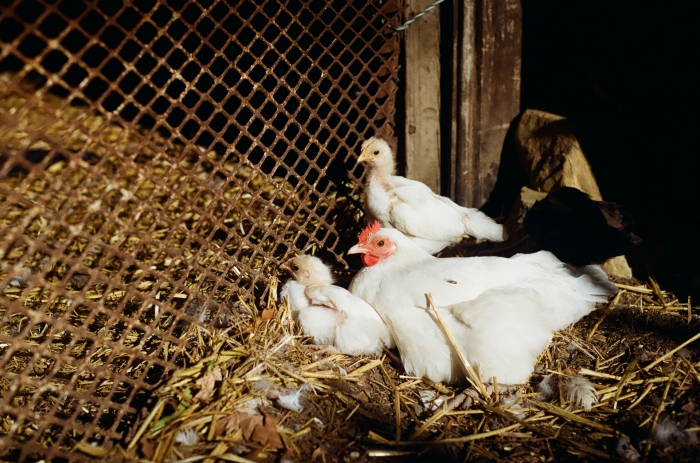 Finding answers to urgent social needs is also the role of a true prophet, I believe. A prophet does more than just speak.

South Africa has a huge problem of children in need of foster care and it’s way more logical and also easier to find a nice big place for many children than one small place for each child. 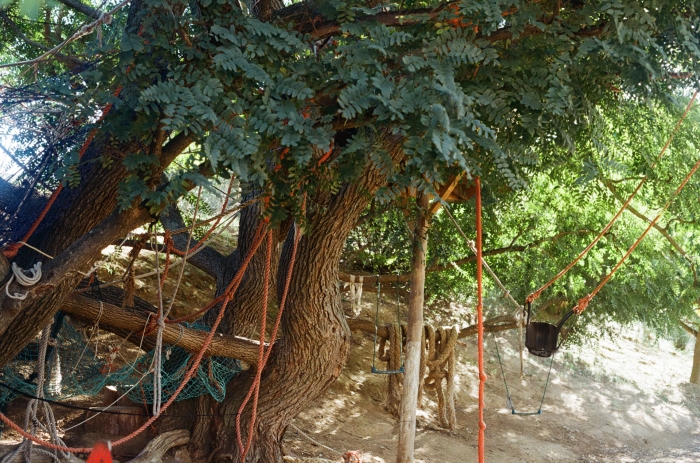 For three years, the farm was a place of safety for street kids, these  “damaged children”, that seem to be the mass production in this wobbly republic.

The effect of the farm on these street kids is almost magical, though completely logical. I believe many problems of our societies like anxiety, depression, etc, come from our constant disconnection of our natural womb, mother nature. The contact with nature and animals give the kids a new balance and essential landmarks. They grow up with other kids, are  exposed to love and caring and sheep-licking – things they have most of the time cruelly lacked.

Over the last 20 years, 40 abandoned children have benefited from the good care of the farm and its inhabitants.

This is surely the biggest pride of Andre’s life, as well as the most painful for him. He has stars in the eyes when he talks of the good marks of this child at school or the permanent job of this other. These children which were destined to drugs, homelessness and continuous abuse found a way of escaping their condition through the farm.

But Andre burst into tears when he thinks of the children that were taken away to government’s shelters after having lived at the farm. Social workers made a great job (sic!) by pulling out these youngsters and bringing them to foster parents in the townships so they could be “with their people”.
This sounds so absurd.

“We have to take the children out of the bloody townships!” he says.

So what happened to these kids who were pulled out of the farm? Well, as expected, they simply returned to affective and material drought.
Andre thinks of two examples, this girl who got pregnant so young, only a few months after leaving the farm to return to the township, or this boy who got back into drugs.

When I see the farm, I see a little heaven on earth, but Andre sees mostly failures. He didn’t manage to convince the authorities that the foster farm is necessary for the community.

Is the blame on him?

What is an old man’s word and the destiny of street children in front of the millions that could generate the property ?

Since 2013, ERF81 has become a permaculture farm when Tyisa Nabanye -“feed others”-, was created. Starting with a small patch they slowly took on a wider area, the NPO organized workshops to sensitize kids to gardening and permaculture. 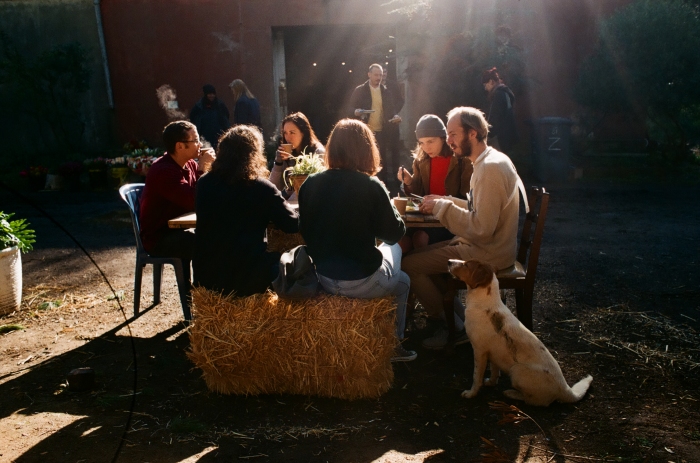 With the fruits and vegetables they harvested, they started a market. The market is now vibrant, with second hand clothes, organic beauty products, smoothies, shakshukas and protea flowers, to name a few. Every sunday, a different artist plays music live.

Every time, Andre is pulling the horse Skattebol with his grand daughter Katya on it and make a triumphantly cute entrance at the market. 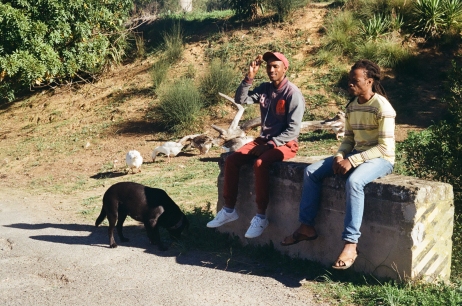 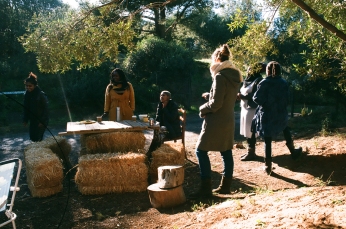 Having lived in the Rainbow Nation for more than a year, I scarcely saw places where the rainbow actually happens like at ERF81.

White children from Tamboerskloof coming to feed the rabbits, kids from the townships coming for workshops… And these “damaged kids” who arrived at the farm one or two decades ago and who turned into bright and balanced young adults.
A community of people, from different colors and community, living and working together, uplifting each others. If there is a miracle in South Africa, this is one of its manifestations. 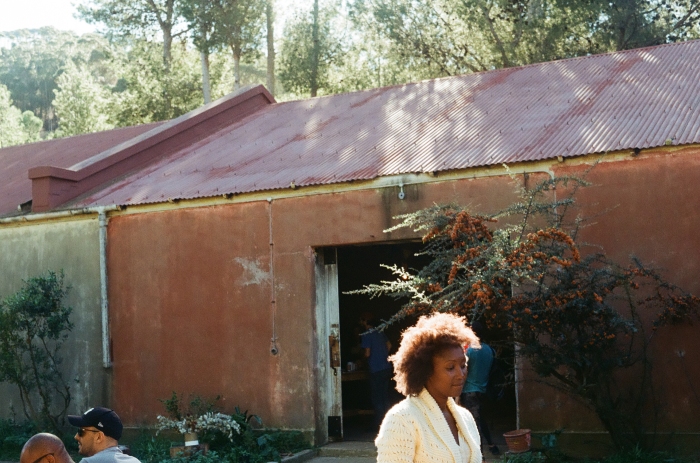 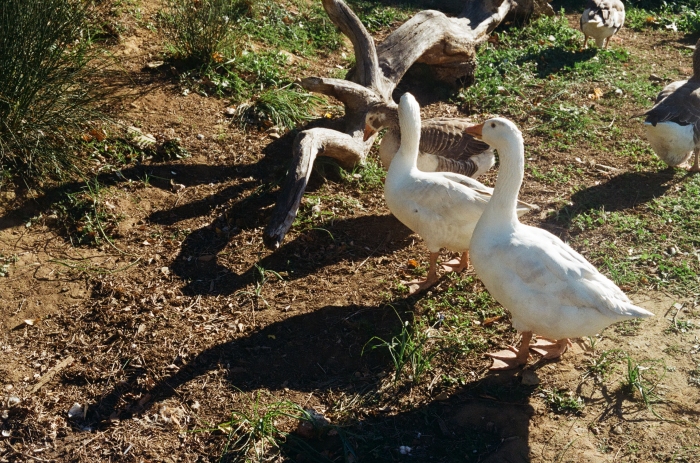 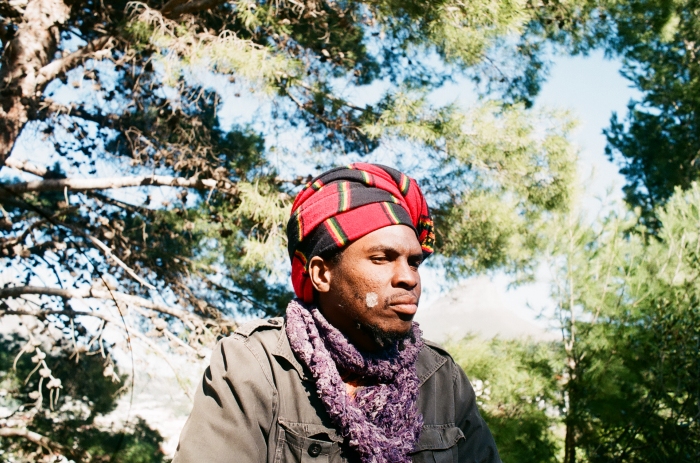 Since then, the activities of the farm have been tolerated, until the application of the eviction planned for the end of August 2016.

My naivety is always hurt when I see such projects being threatened. The world would be such a greater space if people like Andre and places like ERF81 was encouraged and not dismantled.

As Andre says, “we can’t do everything for money, we have to think of the future”.

We have to take responsibility for the future we want in South Africa.

There’s still a chance to save the farm:

A petition is online.

If you don’t know ERF81 and you live in Cape Town, take some time to go there.
If you’re lucky enough, you’ll see a man with a white beard and 10 necklaces around his neck, each one with a different key, walking around, thinking out loud and usually followed by a little dog-goat called joana.
Don’t be intimidated especially if you see him in a Miley Cyrus type of onezie.

This man knows so much that even his silences are thoughtful.
So if you see the afrikaans prophet, please say hello to him, and thank you for everything and for all of us.